HOMAGE TO THE OCEAN FOREST HOTEL by Dino Thompson

HOMAGE TO THE OCEAN FOREST HOTEL
People called it The Million Dollar Hotel, The Castle
on the Ocean, The Wedding Cake Hotel. Most us locals just called it…The Hotel.


Why should anyone care about the long-gone hotel? Because it was the splendiforous white castle on the north end of town we called… The Ocean Forest Hotel. It loomed large over the beach on a 30-foot-above-sea-level plateau and...

It was much more than just a hotel.  It was a spectacular architectural remnant of the most ambitious attempt to “Create the most desirable haven of rest and recreation in the world…the most complete playground ever contemplated.”


Those high-filootin words were the voice of the visionary developers describing their grandiose venture. The venture, called Arcady, was named after a place in ancient where men found peace and solitude in their natural environment. The natural place they chose for this dream was that ribbon of sand we would know as Myrtle Beach. Greenville’s John T. Woodside and his brothers were the originators and constructors of that vision.

The Dreamers
Land acquired in 1925, the hotel and golf course were finished in 1928. These were the leading actors in a breathtaking 60,000 acre resort and ocean swept production. The founders of this grandiose dream went all in with their lives, money and reputations. The '29 Crash would lop the economic legs off their attempt at creating a coastal paradise.


The Woodsides lost more than their shirt. They lost their six textile mills, (the largest textile mill under one roof in the entire world). They lost their financing, their fortune, their 17-story Woodside National Bank, their magnificent hotel, and their nowhere-else-on-earth dream. They lost the entire coastline of Myrtle Beach, 12 miles of pristine shoreline garnished with 30-ft sea-oated sand dunes, twisted live oaks and windswept myrtles.


Arcady was to be the most ambitious resort haven in the entire country. And it would have.   Seventy-five years later nothing touches the concept or the finished product.

Ownership
When completed, control and ownership of Arcady would be turned over to the members. No part of the project could ever be sold. The first 500 family memberships would be sold at heady $1,250, which would give them, “…the privilege to build and occupy homes in a specially favorable and restricted section, if they so desire.”

Ocean Forest Golf Course & Clubhouse
Guests and members could opt for use of the Robert White designed 27-hole golf course and stay on premise in the 60-room Georgian clubhouse and inn. The golf layout designer would become the PGA’s 1st President. The all-male golf course would be frequented by actors, politicians and the legendary likes of Sarazen and Snead. A few cigar smokers and gimlet drinkers lounging around that same clubhouse conjured up a need for a magazine dedicated to sports and leisure. They would name the publication Sports Illustrated.

Outdoor Amphitheater
Also overlooking the ocean, nestled beside the south side of the hotel, they built an acoustically-correct, open-air amphitheater. Locals called it The Marine Patio. You could savor the dance music of all the famous big bands…. Carmichael, Dorsey, Basie, Spike Jones, Harry James, Lennon Sisters, with the silvery ocean in the background. Those who couldn’t afford the ticket, would blanket-sit on the moonlit sand dunes and ogle the comins and goins of snazzy dressed couples sippin illegal cocktails.
When the band kicked in beach-listeners would sand-boogie barefoot to a hip swing tune.


The Architect.
The designer of our wedding cake hotel was MIT grad Raymond Hood. He also created the Gothic Chicago Tribune Tower, the Daily News building in New York, the McGraw-Hill building, the black-brick Radiator Building which became the Bryant Park Hotel. Raymond Hood was also the senior architect for Rockefeller Center and the RCA Building.


Outdoor Amenities
Other play-toys offered were red-clay tennis courts, skeet & trap range, dieticians, Near the golf course was an open-beam-cypress horse stable which housed 40 rent-a-rides. Also on the recreation menu was archery, miles of hiking, hunting, riding trails and of course 14 miles of sailing, sunning and fishing along a pristine ocean front lined with windswept myrtles and cabana’d beaches. And within walking distance, 6 freshwater lakes paralleling the Atlantic were there for canoeing, bass fishing and moonlight trysts.


Amenities which were to come, were a separate golf course for ladies, separate courses for the children, boys and girl camps, nurseries for the infants, beach and bath house, wildlife sanctuary, and Yacht Basin carved out where the current Yachtsman Hotel sits today.
Nothing on our Grand Strand or any other strand was conceived quite that grand.

For most of my life its fabulousity has never been exceeded. It was our social universe and the biggest, baddest, most imposing structure for 200 miles. It was our Coliseum, our Taj Mahal, our Parthenon. Ask any local yokel directions and the answer went something like…"Be bout a mile past the Ocean Forest."


We were a Baptisty dry state back then but the Ocean Forest was the closest thing we had to royalty so the local constabulary cut them serious slack. My dad said it was painted with invisible paint, the sheriff just couldn’t find it.


Friday the 13th of Sept 1974
I never ride past without it looming large over my memory. Imagining it refurbished... seeing linen-garbed, pomaded dreamy couples sipping perfect manhattans on that perfect veranda in front of windswept myrtles on that perfect stretch of cabana'd beach.


50 years after its immaculate construction, on that sunny but tragic Friday the 13th, the last castle of the Woodside brothers’ dream was tumbled into twisted rubble by Hudgins and Company demolition. Fade to black. A perfect implosion…an imperfect ending.


We crouched behind the sand dunes and cried for our Castle on the Sea.
Even the head of the demolition company told me the hotel should have been renovated. That it was the finest construction he had seen. They auctioned off the woodwork, crystal and glitter, even the cups and saucers and room keys. They then buried the broken bones of the once magnificent hotel in what is now Cagney’s parking lot.


All that's left of what shoulda been our Breaker’s, our Greenbrier, our Fairmont, our Plaza hotel… are just a few artifacts, some postcards, concrete roads, the Pine Lakes Golf Course and Club House and pangs of what mighta been, coulda been, shoulda been.


In my mind it's still there. Cause I want it to be. 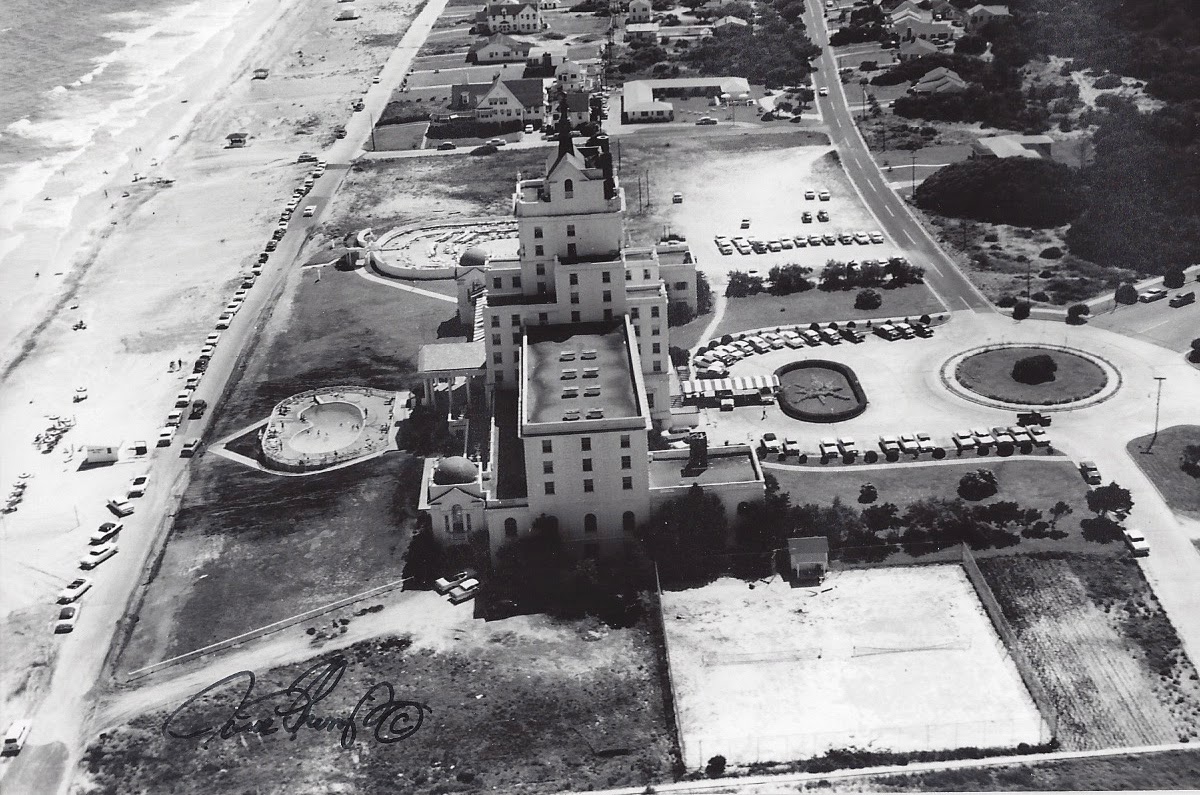 
Posted by Diogeneclemens at 1:16 PM